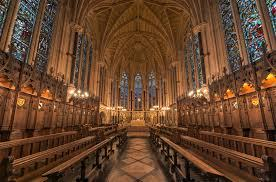 When we relocated to Ballarat, my parents enrolled me in an Anglican school.

On the first day, the teacher announced first period was chapel. I didn’t know what that was. ‘It’s like church’, my mother explained as she was leaving. I had never been to church and did not find this comforting. The teacher watched us through hawk-like eyes, already disapproving.

We were required to form two lines outside the classroom: a line of boys and a line of girls. We were to walk, holding the hand of a boy, out of the junior school and into the senior school. Inside the chapel, we were to sit down on the wooden pews and listen to the sermon. The service was delivered to the whole school and initially, being very young, I understood nothing and the hour served as a time for my mind to wander free of the punctuation of a teacher’s instructions. Later, I observed that sometimes certain of the students would come to the front of the chapel, kneel, and imbibe something proffered by the priest. The significance of this ritual was unknown to me, but it seemed to bestow a certain dignity on those who participated.

Sometimes a student would rise to stand at the pulpit and carefully read a portion of the bible. I wondered how these students were chosen. I was an excellent reader and it seemed only a matter of time before I would be asked to step up to the pulpit and demonstrate my skills.

But as I moved up into Grade Four and then Five, my perceptions came into focus. I resented the walk to chapel in gender-demarcated lines, and the cumbersome uniform that seemed to have marched on through the ages, unaffected by the vagaries of fashion. When the sport teacher caught me abstaining from the Lord’s Prayer in assembly, and leant down so that his ear was next to my lips, I remained resolutely, obstinately silent.

I stopped being afraid.

At some point in my early childhood I must have seen a film about the civil rights movement, because I have a clear memory of an image coming into my mind during chapel one day of a black man stepping up in front of a crowd and delivering a rousing, audacious speech.

I became aware of the opportunities a microphone and an audience could bring. I imagined a teacher approaching me and marking out the chapter and verse. I saw myself nodding docilely and waiting for the moment when the stage would be mine. I could almost feel the microphone at my lips as I pictured myself stepping up and leaning forward, the whole school’s eyes and ears on me, every teacher, every student, the older kids, the younger kids all waiting, expecting to hear another dull bible story when instead – !

Exactly how I would have expressed my views, had I the chance to hijack a service, I never decided.

In any event, they never picked me.